Part Three: Translation and the Art of Writing

We left off last time with the question of how to teach writing. Is it just a knack, or a natural ability? For some people, it probably is. Yet according to Cicero, it could be taught. But how? What techniques should be used? According to him, one essential exercise was to practice the art of translation:

For my part, in the daily exercises of youth, I used chiefly to set myself that task which I knew Gaius Carbo, my old enemy, was wont to practise: this was to set myself some poetry, the most impressive to be found, or to read as much of some speech as I could keep in my memory, and then to declaim upon the actual subject-matter of my reading, choosing as far as possible different words. But later I noticed this defect in my method, that those words which best befitted each subject, and were the most elegant and in fact the best, had been already seized upon by Ennius, if it was on his poetry that I was practising, or by Gracchus, if I chanced to have set myself a speech of his. Thus I saw that to employ the same expressions profited me nothing, while to employ others was a positive hindrance, in that I was forming the habit of using the less appropriate. Afterwards I resolved,—and this practice I followed when somewhat older,—to translate freely Greek speeches of the most eminent orators. The result of reading these was that, in rendering into Latin what I had read in Greek, I not only found myself using the best words—and yet quite familiar ones—but also coining by analogy certain words such as world be new to our people, provided only they were appropriate.

So what Cicero is saying is basically this: good writing can’t be reduced to following a recipe or a set of methodical rules; it has to be learned by imitation. One method of imitation is to take great works and paraphrase them, and that was his first approach. The problem with this was that his models were already expressed so eloquently, it was impossible to paraphrase them without substituting worse words for better ones. Instead of learning how to write well, it was teaching how to write badly.

His solution? Translation. Take the best works in one language, and then express them in your own language just as eloquently. This allowed for true imitation without mere repetition, and therefore was an effective method for learning how to write well. In theory, of course, any language could be studied for the purposes of reading and translating the best works in that language, but in practise people only study the classical languages this way. This meme sums it up pretty well: 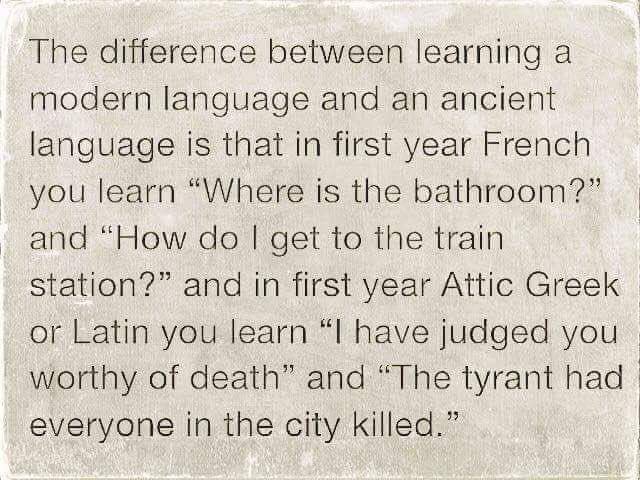 The study of modern languages turned a long time ago towards getting the mundane verbal equipment necessary to get around in a foreign country. Classical languages (that is, Greek and Latin) are still chiefly taught for the purposes of accessing the best literary works in those languages, and appreciating them as literature through the art of translation. That’s not the only reason to use classical languages to teach writing, of course – more on that later. It does help quite a bit, though, because the overall goals and the goals of most classical language curricula are already quite well aligned.

But the art of writing, while crucial to a good education, is not the only compelling reason to teach the art of translation through the classical languages. Learning the art of translation is also crucial for helping us understand written works in translation, and there’s one of those we are all concerned with as Christians — I’m referring, of course, to the Bible. In the next part of our series, we’ll consider that question more, with the help of St. Augustine.